Who Did Jesus Die For?

Teacher: Yale Wall Series: The Gospel Is For Everyone 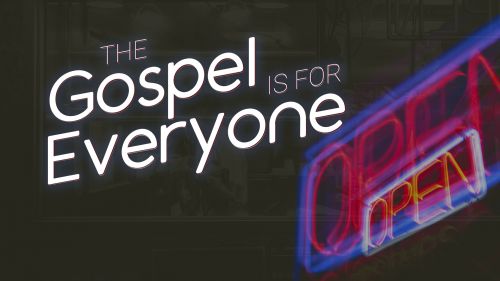 The Gospel is for Everyone

WHO DID JESUS DIE FOR?

1. JESUS CLEARLY TELLS US  THAT SALVATION IS FOR EVERYONE

We see this all over Jesus’ teachings that when he speaks about Salvation and his Sacrifice, he does it with all inclusive verbiage.  The question about who salvation is for is a lot less about the outcome of who gets saved, as much as it's about His intention.

In the following verses, is the intention/goal that ALL will come to know Jesus, or is His intention that only SOME will say yes?

John 12:31-32
31 Now is the time for judgment on this world; now the prince of this world will be driven out. 32 And I, when I am lifted up from the earth, will draw all people to myself.”

John 1:29
29 The next day John saw Jesus coming toward him and said, “Look, the Lamb of God, who takes away the sin of the world!

1 John 2:2
2 He is the atoning sacrifice for our sins, and not only for ours but also for the sins of the whole world.

1 Timothy 4:10
10 That is why we labor and strive, because we have put our hope in the living God, who is the Savior of all people, and especially of those who believe.

Hebrews 2:9
But we do see Jesus, who was made lower than the angels for a little while, now crowned with glory and honor because he suffered death, so that by the grace of God he might taste death for everyone.

2. GOD REAFFIRMS THAT SALVATION IS FOR EVERYONE

Acts 10:11-15
11 He saw heaven opened and something like a large sheet being let down to earth by its four corners. 12 It contained all kinds of four-footed animals, as well as reptiles and birds. 13 Then a voice told him, “Get up, Peter. Kill and eat.”
14 “Surely not, Lord!” Peter replied. “I have never eaten anything impure or unclean.”
15 The voice spoke to him a second time, “Do not call anything impure that God has made clean.”

God is talking about food and other Jewish customs and laws from the Old Testament, but He’s also talking about people - specifically gentiles.

Acts 10:27-29
27 While talking with him, Peter went inside and found a large gathering of people. 28 He said to them: “You are well aware that it is against our law for a Jew to associate with or visit a Gentile. But God has shown me that I should not call anyone impure or unclean. 29 So when I was sent for, I came without raising any objection. May I ask why you sent for me?”

Acts 10:34
34 Then Peter began to speak: “I now realize how true it is that God does not show favoritism 35 but accepts from every nation the one who fears him and does what is right.


Acts 10:42-45
He commanded us to preach to the people and to testify that he is the one whom God appointed as judge of the living and the dead. 43 All the prophets testify about him that everyone who believes in him receives forgiveness of sins through his name.”
44 While Peter was still speaking these words, the Holy Spirit came on all who heard the message. 45 The circumcised believers who had come with Peter were astonished that the gift of the Holy Spirit had been poured out even on Gentiles.

God makes it clear here for us, that his sacrifice and his salvation is for everyone!

3. WE HAVE TO STAND ON THE TRUTH  THAT SALVATION IS FOR EVERYONE

Right now, the idea of salvation only being for a select few is a Biblically-incorrect way of looking at things that is running rampant in American churches.  This version of theology is called Calvinism, or Reformed theology.

Says: We are dead in our sin and therefore are not capable of choosing anything except sin.
Also means: There is no way for us choose salvation, because we are too dead in our sin.

Ephesians 2:1-2
As for you, you were dead in your transgressions and sins, in which you used to live

It’s true, we were dead in our sins, but God created us with free will and He bridged the gap for us through Jesus to be able to accept forgiveness.

Romans 10:9
If you declare with your mouth, "Jesus is Lord," and believe in your heart that God raised him from the dead, you will be saved.

There is an obvious choice here for relationship with Jesus, and we see that same choice in every salvation experience in the Bible.

Says: God chooses some people for eternal life in Heaven, and condemns some people to Hell.
Also means: There’s no reason for evangelism because Elected people will become Christians no matter what you do, and everyone else will end up in Hell. Or, if you do evangelize, you are only doing it because we don’t know WHO the elect are, or when they will be saved.

John 6:44
44 “No one can come to me unless the Father who sent me draws them, and I will raise them up at the last day.

There is some good evidence that God does draw us in, but that's not the whole story.
John 12:32
32 And I, when I am lifted up from the earth, will draw all people to myself.”

Says: Jesus knew who the Elect were, so He only died for them. He didn’t die for the sins of the whole world, just those Predestined for Heaven.
Also means: Some people are incapable of accepting God’s gift of salvation, because their sins were not paid for.

Acts 20:28
Be shepherds of the church of God, which he bought with his own blood.

Jesus did in fact lay down His life for the church, but it doesn’t say anything about Him doing it exclusively for the Church.  There are SO MANY verses talking about His sacrifice being for the WHOLE WORLD.

John 3:36
36 Whoever believes in the Son has eternal life

1 John 2:2
2 He is the atoning sacrifice for our sins, and not only for ours but also for the sins of the whole world.

Hebrews 2:9
by the grace of God he might taste death for everyone.

Says: If someone is part of the Elect (meaning God chooses them), then His grace is irresistible.
Also means: They couldn’t say no if they wanted to, and there is no choice at all because God himself is so irresistibly great.

John 6:37
37 All those the Father gives me will come to me, and whoever comes to me I will never drive away.

Irresistible Grace would say that this verse means that Christians are chosen by God and given to Jesus, so there is no choice they can’t resist it.  But if you keep reading, it paints a different picture:

If there was 100% irresistible grace, Jesus wouldn’t talk about wanting everyone, he would only talk about who He already has.  Also, the word "believes" shows us that there is a choice to believe or not believe.

PRESERVATION OF THE SAINTS

Says: Because God chooses who becomes a Christian and who doesn’t, there is no way to lose salvation.
Also means: You are sure of your salvation because you didn’t choose it, God chose it for you.

The idea that you can’t lose your salvation, is absolutely a Biblical truth, but not for the reason listed here.

2 Corinthians 5:17
Therefore, if anyone is in Christ, the new creation has come: The old has gone, the new is here!

Through God, we are made into new creations.  When you have been transformed by God, there is no going back.

So, who did Jesus die for? EVERYONE!