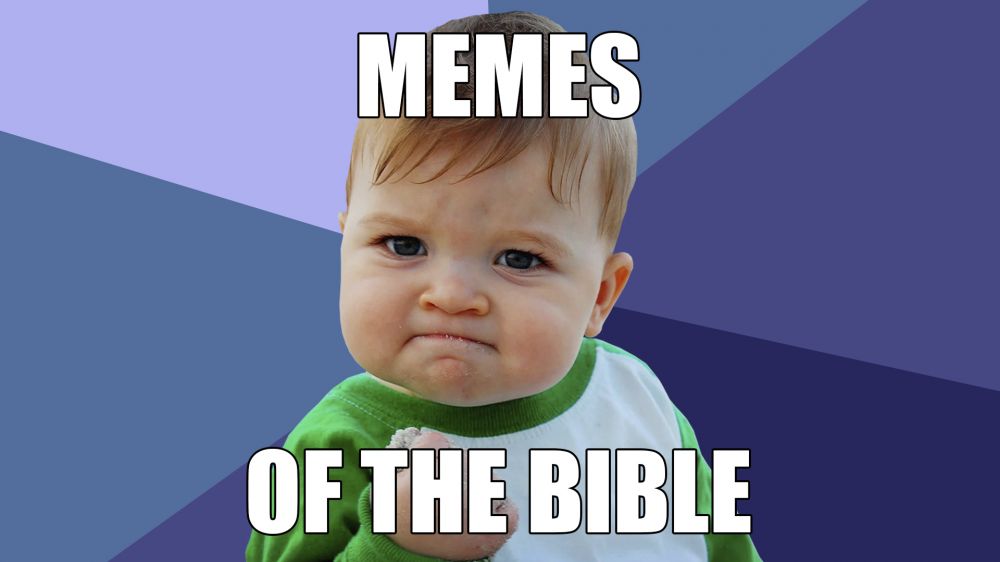 A meme is about taking something normal, relating it to something to prove a point , and eventually causing imitation.  Jesus did this often, through parables.

There are plenty of places in the Bible where humility is presented as being a godly trait we should have, like:

James 4:10
10 Humble yourselves before the Lord, and he will lift you up.

Proverbs 16:19 NLT
Better to live humbly with the poor than to share plunder with the proud.

1 Peter 5:6
Humble yourselves, therefore, under God’s mighty hand, that he may lift you up in due time.

All of those verses are very clear and the command to live out humility is obvious, but I love that Jesus takes things like humility a step further. He uses parables to verbally paint a picture that shows us what humility should look like.

Both of these stories involve the pharisees. Pharisees at that time were the super-religious Jewish elite, who lived a very strict life of tradition and adherence to the law. The problem is, there was a lot going on under the surface with them. They were so consumed with power that the Jewish religion of the day had turned into more of a way to control people than it was something that pointed to the power and supremacy of God.

The Parable of the Place of Honor at the Table

Luke 14:1-6
One Sabbath, when Jesus went to eat in the house of a prominent Pharisee, he was being carefully watched. 2 There in front of him was a man suffering from abnormal swelling of his body. 3 Jesus asked the Pharisees and experts in the law, “Is it lawful to heal on the Sabbath or not?” 4 But they remained silent. So taking hold of the man, he healed him and sent him on his way. 5 Then he asked them, “If one of you has a child or an ox that falls into a well on the Sabbath day, will you not immediately pull it out?” 6 And they had nothing to say.

Jesus calls out both of those things that defined the pharisees (legalism and hypocrisy) as a precursor to the real issue beneath the surface: A lack of humility.

Luke 14:7-14
7 When he noticed how the guests picked the places of honor at the table, he told them this parable: 8 “When someone invites you to a wedding feast, do not take the place of honor, for a person more distinguished than you may have been invited. 9 If so, the host who invited both of you will come and say to you, ‘Give this person your seat.’ Then, humiliated, you will have to take the least important place. 10 But when you are invited, take the lowest place, so that when your host comes, he will say to you, ‘Friend, move up to a better place.’ Then you will be honored in the presence of all the other guests. 11 For all those who exalt themselves will be humbled, and those who humble themselves will be exalted.” 12 Then Jesus said to his host, “When you give a luncheon or dinner, do not invite your friends, your brothers or sisters, your relatives, or your rich neighbors; if you do, they may invite you back and so you will be repaid. 13 But when you give a banquet, invite the poor, the crippled, the lame, the blind, 14 and you will be blessed. Although they cannot repay you, you will be repaid at the resurrection of the righteous.”

This parable is split up into 2 parts:

The Parable of the Pharisee  and the Tax Collector

Luke 18:9-14
9 To some who were confident of their own righteousness and looked down on everyone else, Jesus told this parable: 10 “Two men went up to the temple to pray, one a Pharisee and the other a tax collector. 11 The Pharisee stood by himself and prayed: ‘God, I thank you that I am not like other people—robbers, evildoers, adulterers—or even like this tax collector. 12 I fast twice a week and give a tenth of all I get.’
13 “But the tax collector stood at a distance. He would not even look up to heaven, but beat his breast and said, ‘God, have mercy on me, a sinner.’
14 “I tell you that this man, rather than the other, went home justified before God. For all those who exalt themselves will be humbled, and those who humble themselves will be exalted.”

For Jesus to condemn the Pharisee’s attitude and instead point up to the brokenness of the Tax Collector shows how much He despises pride.

Jesus is ALL ABOUT people being real  about Who they are, and Where they are in life!

Pride and Insecurity are stems of the same root issue. Embracing insecurity is the same issue as embracing pride. It’s a humility issue. It's forgetting who the host of the dinner party is, and forgetting that HE and HE ALONE is the one who ascribes honor to us. Rejecting honor and value that God places in us, is just as prideful as ascribing honor to yourself.

At it’s core, humility is letting God define you, and not trying to define yourself.

If you are insecure, know this:

If you are prideful, know this: